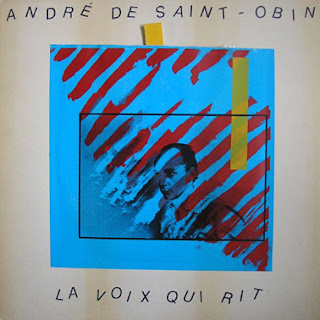 This is a posting of the almost complete works by Andre De Saint-Obin. The only track missing is his piece on 'Insane Music For Insane People Vol. 3' (anyone have that for me?). I believe Ding Dong first released the 7" and then the cassette. Especially the cassette is a long lost item, which deserved to be released on CD. I have no idea where the live recording came from, but it was given to me by a good friend. The cassette was transferred to CDR for me by someone else, and thus I don't have the cover. The cover shown with this post is the 12" cover version of the 7". If I remember correctly there were 500 of the 12" covers and 500 of the 7" covers There was a glitch on 'Desolation', which gives the music a strange bump half way through. Don't let that spoil the fun. Andre de Saint-Obin played all instruments (voice, guitar, bass, keyboards, drums an electronic percussion) himself and recorded it on a four track - hence the title 'Sound On Sound'.

Thanks so much man !
I can't believed it /
This is what you're looking for too , insane music Vol.3- enjoy!:

thanks! if you know of any other insane music tapes for download let me know!

yes, do you have a n email, i send you the list
pokepi