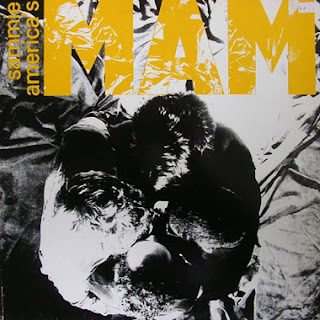 When the independent labels became a threat to the majors, the majors launched their own independents, EMI starting Wereldrekord and Phonorgam started Backdoor. You could expect that they released some lousy third rate artists, but this LP (and the forthcoming LP by Mo) will proof you wrong. Sammie America's MAM came out of Sammie America Gasphetti, and released a couple of 7"s (o.a. on Top Hole, see yesterday), before going to Wereldrekord to release their self-titled debut LP. The band's line up was Sammie America (bass, vocals), Pieter Bon (rhythm boxes, casio, lead vocals), Antoine Kroes (guitar, percussion, vocals), Mark van Woerkom (guitar, percussion, vocals), so no drummer is this early line up. The album is produced by Hennie Vrienten, then a youth idol. The record sounds mature, well produced, lots of vocals and lyrics that I don't get. They made some more albums, with a drummer, which I don't have. Some of the members are still active in popmusic and poetry these days.

hi, i do not know if you downloaded already english subtitles - singles, but i reuploaded these files, ('cause the server deleted them). Check it.

yeah i already did download them. thanks a lot.