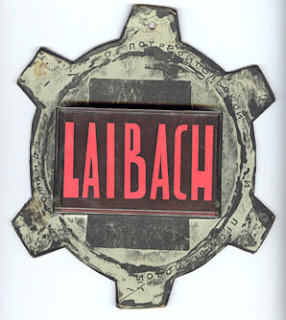 One of those great concerts that I missed, even when I knew Laibach at the time, having their first split cassette with Last Few Days and the first tape on Staalplaat (which I will post due time, along with the second tape). On Discogs this is called 'Live In Hell', but that's not on the cover anywhere, so I am clueless who made that title up. It's the tape with that nice cardboard cog wheel, which was no doubt a beast to manufacture. But the tracklisting is this
A1 Vier Personen
A2 Nova Akropola
A3 Vade Retro Satanas
A4 Die Liebe
B1 Du, Der Herausforderst
B2 Drzava
B3 Vojna Poema
B4 Sredi Boji

thank you very much!
i've been looking for this.

p.s.
inside cover of the tape "laibach4.jpg" seems to be corrupted.

oh well, too bad then. if you give me your e-mail address i'll send it over.

that's very kind of you!
thank you again.

i've always found the early liabach sound very appealing, thanks for posting this.

I would like to add that, although the tracklisting is undoubtely correct, the titles are not mentioned anywhere on the cassette publication.
Another detail is that the bakside of the cogwheel has of stamp of a crossed pair of hammers.