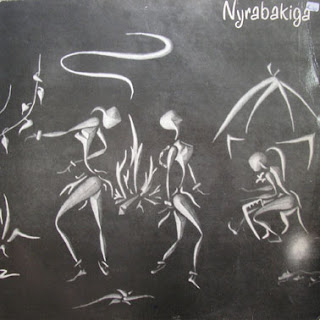 The first time I heard this on the radio it blew me away. Was probably in 1982 or 1983, but I had it taped. Only a few years I found the record. Even more obscure than say yesterday's Neon, I have no clue who or what Nyrabakiga is. It was recorded at the Backlash Studio in Rotterdam, which was linked to a record shop Backstreet. According to z'ev, who also had a record on this label (which was recently re-released by Die Stadt), it was a real studio, not just a guy with tape-recorder. That label released some true crazy music, one of them is Suspect which I'll do in the future. Nyrabakiga has a driving rhythm, is vague ethnic and just a great record.