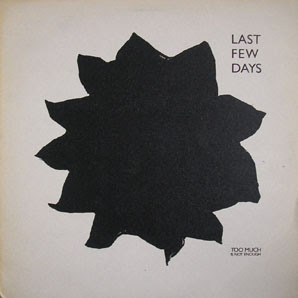 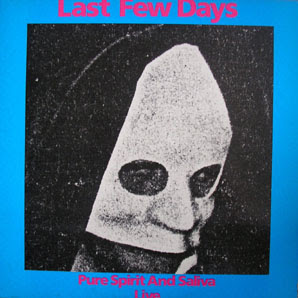 One of the more obscure groups from England, including members of 23 Skidoo, and film maker Daniel Landing. They never wanted to release anything, but of course somethings were released. They played their concert at odd hours, like 7AM. According to Discogs: "Daniel Landin (aka D. Styme), Si Joyce (aka Si Gross) and Keir Wahid (aka K. Warhead & K. Fraser). They were regularly helped out by Fritz Haaman (aka Fritz Catlin) who also performed with Laibach during the joint tour, and occasionally by Sam Mills, both members of 23 Skidoo."
These two works are their outings on vinyl. 'Too Much Is Not Enough' is, in my very humble opinion a classic. Worth alone downloading this for. The 'Pure Spirit And Saliva' LP was recorded throughout their European tour, and on the backside it says "on a blisteringly hot day in June 86, K Warhead and S Gross from Last Few Days sat in a small box with Dave Henderson, a pile of cassettes, an equalisation unit that no-one understood and a Revox... this is the result'. The last four tracks on the b-side are considerable lower in volume, which I didn't correct and throughout it's not a great pressing. But on the bright side: I'll be posting their Staalplaat cassette and their split with Laibach some day soon.

thank you very much again!
you can read interesting artice about LFD here:

Great suff. I remember split tape they did with Laibach in 80s. thanks.

Many thanks for the LFD.
Is there a chance to upload the LFD Staalplaat Cassette?

any chance for a re-up of this?

Has this gone down again or is it a problem at my end? I've really been enjoying the Last Few Days stuff you've posted so it'd be great if you could re-up this (again!). IBx