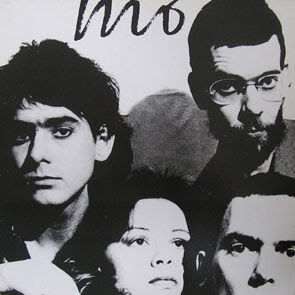 This record I have always been fond off. Mo came from Delft, The Netherlands and their odd line up was this Clemens De Lange (keyboards), Harm Bieger (drums), Heili Helder (vocals) andHuub De Lange (bassoon, keyboards). Especially the bassoon is a true odd ball in popmusic. On this, their first self-titled album, you'll find 'Fred Astaire' which was quite a hit back then, and even to this day surfaces in lower regions of the Top 2000, the all-time favorite list. After the first album everybody but the drummer left, who continued with three new members, relying more on keyboards, making two more albums, which I don't have but seem of lesser interest to me. The three members left music entirely. This LP is a great and original new wave album.

Was going to check this one out, but I get a "File not Found" error message!?

THANK U VERY VERY MUCH

Thanks for this. Mo was an amazing band. I can't believe they left music after this record...