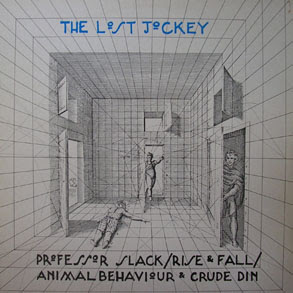 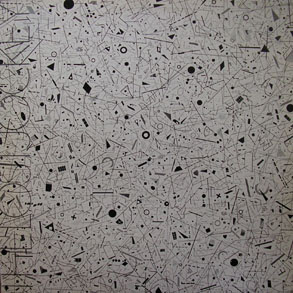 One of things I am still clueless about is why the work of The Lost Jockey was not released on CD. The Lost Jockey were Andrew Poppy, John Barker and Orlando Gough. They composed their pieces of minimal music and then performed them. 'Professor Slack' was originally released as a 10" on Operation Twilight and later re-issued as a 12" by Battersea Records, but with wrong listing of the tracks. That record is great. The LP is more mellow, with lots of piano playing in Steve Reich fashion, but it suffers greatly from the length - the b-side goes over thirty minutes - and sadly even after cleaning by my friend Freek still sound a bit scratchy. Well, another reason why this should be on CD.

you're doing a terrific work here, mate! remko scha blew my mid, and i've been looking for andre de saint obin's stuff for a really long time.
thank you, i do appreciate your effort!

thanks. let me know if you have any requests!

INCREDIBLE - took me forever to find vinyl and now this saves me burning it !! Does anyone have REGULAR MUSIC LP and stuff they did for TOUCH - regular music was off shoot of Lost Jockey - in a similar vein but maybe not as good

You can also hear a bit of regular music at
http://www.wnyc.org/shows/newsounds/episodes/2007/07/11

thanks for the extra information. i have some of the touch cassettes, which i may post in the future. not the regular music LP, sorry.

Hi, John Wesley-Barker here, one of the founder members of Lost Jockey. I couldn't get the zip file to download, can you help? Can't believe people are interested in this old stuff, but you never can tell eh? I have an MP3 available of my piece Rise & Fall available for download on my website, follow the links to Music. The reason none of Lost Jockey has been released on CD is that it would have had to be re-released and the group split up with no legal constructions to enable such releases.

erm, click on the given link, which goes to massmirror, then click top right 'skip ad' and then click on of the four given places to download. pretty easy, me thinks.
i don't think i understand what you say about legal constructions. les disques is bankrupt, so if all members agree, a CD would be easy. i'd love to do it for you! get in direct contact: 433rpm@gmail.com

Unfortunately, if you click on th bypass Ad you then get " file not found"

Any chance of reposting it there?

I have the orignal 10", and really enjoyed John Wesley Barker's Rise and Fall mp3 and it's made me want to hear the other pieces again - but no record player any more!

massmiror has some problems, and in stead of re-upping right away, i'll wait a few days and see if they get their act together. please e-mail me (433rpm@gmail.com> if it doesn't work on monday

Do you have any Man Jumping stuff. Orlando Gough went to form Man Jumping after Lost Jockey and two albums were released. Very difficult to find now.

nothing by man jumping, sorry

File still not found...any chance of a re-up?

well, wrinkle on tom, i saw your previous request, but since you insist on having lost any ability of finding out what happened, and simple sending your request again by comment, i am forced to put it on this blog. you could have looked further, investigated my blog and oh oh what do you see on the right side bar, by some called fine print (which means 'i am too lazy to investigate'):

We have used Megaupload in the past and therefore many links are currently unavailable. Mediafire has suspended all links on August 14 2012, so none are available - another set back. Since share sites are becoming increasingly unstable, you can send an e-mail with a few requests of older and deleted posts and I will send them through a private 1:1 server. Please don't call it an re-up request and i don't need lengthy explanations of why you want something. Just a short list. So leaving a comment is useless, as I can't send this file then. You can't submit a long list of requests, just a few every now and then. Music is to be heard, not collected. If you didn't read this, fine, but just don't expect a proper reply. Oh, did I mention that leaving a comment with a re-up request is useless? That they will deleted? Maybe I didn't. COMMENTS WITH RE-UP REQUESTS WILL BE DELETED.

damn dickhead, just wanted to hear this album. sorry i'm not slobbing the knob of your blog to read every nook and cranny of your blog. i do like your blog, but not your attitude, douchebag.

we live in most curious times indeed. its my fault indeed, and i'm a damn dickhead or douchebag, whatever that is. if you have been following my blog, which your profile suggests, then you'd already know this, so why the surprise?