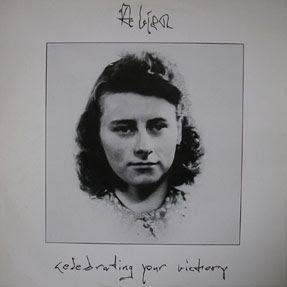 A short one for today but one with a lot of power, this record that has been said to be a true inspiration for Skullflower. Monotonous banging on guitars and drums in two pieces and a feedback experiment. Alien came from Monster, a very small village near Den Haag, The Netherlands. The main man was Frans Lelieveld, who before was involved in a fanzine, BOH and the cassette label thereof. Their compilation cassette might follow one day. Lelieveld also had a band called 'Het Laatste', meaning The Last, because it was the last thing he would ever do. Not so, as this 12", made with a inhertence, came after that. Never heard of him again after that.

Ha, Monster! My wife's home town! I was born 5km down the road, but have never heard of Alien or Frans Lelieveld. Will check it out.

Keep up the good work, you have been promoted to the second site I open in the morning!

Fascinating. I've had this for about 15 years and never had a clue who he/they were. There's absolutely NO info at all on the actual record. Mystery finally solved. Thanks!