Mekanik Kommando - And Then The Wind Died Down (two tapes, Rosebud Records, 1986) 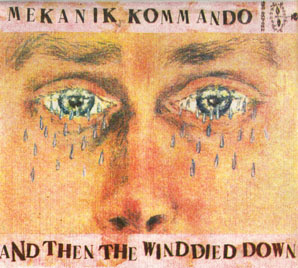 As promised last week, here is the double tape by Mekanik Kommando. It was released in between 'Bay The Moon' and 'Shadow Of Rose' and contains the more experimental work by them. Music for films and other occasions. This tape came in a large box with an extensive booklet printed by Knust (who still use their stencil machines to print exotic magazines, record covers etc.), which I didn't scan. It's a bit unrelated to the music. I tried to separate the various tracks, which was difficult, so I left it one track per side. And oh, after I did the upload to Massmirror, I see I tagged the mp3 wrong as 'As the wind dies down'. The correct title is 'And Then The Wind Died Down'. You'll have to re-tag it, as i'm off to work

great. is there a tracklist available ?