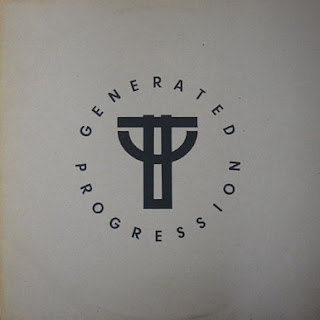 When Three Mad Dog, a band from 's-Hertogenbosch, The Netherlands, won a prize in a talent thing, they wanted to use the money to record a LP, but before recording started the band fell apart. Three Mad Dog was perhaps, in a way, the Dutch answer to Test Department. Bandleader Roderik Henderson went in the studio and recorded this LP in stead, in which he on one hand goes on with Three Mad Dog tribal rhythms and metal percussion, and on the other hand has dark soundscapes. An od mixture, but it works quite well. Generated Progression could be the Dutch answer to Werkbund and Test Dept. After that Henderson didn't play any music anymore and went back to his profession of being a visual artist and these days works as a photographer. The release is on Mission Papua Holland Records, who were from the same city and who released two LPs of their own (one I will post in the future, as the other one I don't have) and they ran a cheap studio, Studio AAwal, in the back garage of V2, who were then also located in this city.

a thousand THANKS for this post.
I was looking for it for so many years. If you want a rip of some stuff like das Wesen, Exploiting the Prophets (i'm looking for the tape on Eksakt records) or more ambiant/industrial, contact me.
I'm waiting for your Mission Papua Holland ' Post now !
PS: there is a 12" by Schlaflöse Nächte

sure, would love that! i don't have the eksakt tape though. but i do have 'one hour for spits' with exploiting on it. which label did the 12" by schlaflose nachte? i only know their lp, 7" and tape.

no, no i am not on soulseek, i don't like that at all. i am very much interested in that 12", and das wesen and exploiting. you can send whatever through an upload on massmirror. send me an e-mail: 433rpm@gmail.com