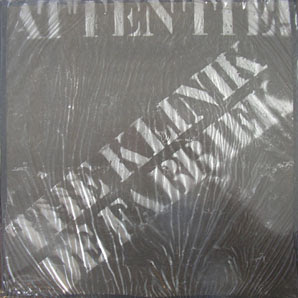 On Discogs I see this being a limited edition of 500 copies, but if my memory serves right, it might be only 250 copies, like so many of the records De Fabriek released around that time, such as Transatlantic Overdub and Technological Aquiver/Beequeen. The grey, silkscreened dirt bag says 'Attentie', but then each side also a subtitle, 'Melting Close' for The Klinik and 'Platanen' for De Fabriek side. Although I never cared that much for similar music of The Klinik's counterbands, I thought this was a great record. Of note: the insert is designed by Frans de Waard, of whom I never thought of as a designer - and rightly so, by the looks of it. But the record is great.

Nico Selen wrote: this album was made by De Fabriek along the same principle as '17 to 7 on 33'. One side was sold to the Klinik, the De Fabriek side was sold in pieces to various people. I delivered 'Dates' and got 30 copies. De Fabriek did the same for their 'Neveleiland' release and even pieces to compilations.

"Of note: the insert is designed by Frans de Waard, of whom I never thought of as a designer"

I've never thought of him as a musician, either.

thanks for uploading this, was never a huge fan of either group but i do listen to the klinik on occasion. thanks

very funny that one mister stelzer. but who knows what Frans de Waard thinks of himself ?

thanks, it's great. Is it me or are there two songs missing from Klinik?

ah the age of internet: always easier to raise half a question with not enough words and then the receiving end has to do all the thinking. why would you think so?