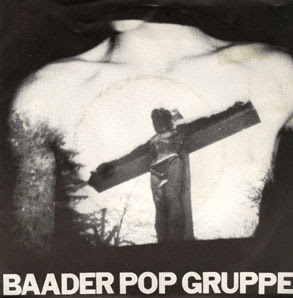 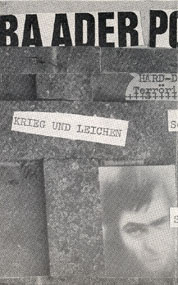 Baader Pop Gruppe was furious synth punk trio who came from a remote part of The Netherlands, before moving to Breda. They didn't exist for very long, around 1982, but I'm sure I saw them live once. The bandmembers are Etwin (guitar, bass, voice), Anja (drums, syndrum, voice) and Simon (voice, synth. perc, bass). Their music is partly driven by sequencers and drums, and resemble DAF a bit. The texts are probably quite serious back then, but sound hilarious these days. The 7" was released by Gramschap, a left-wing magazine who always had something extra, not always a record. The Ex also did a 7" with them. The cassette was released by Stichting Update Materials, from Laren, who released Dier and P. Kok. It always seemed a bit odd for them to release something this political.

aYou(43rpm)wrote this band came from a remote part of Holland. Perhaps you don't know which part or did not find it worth mentioning ? I do not know the band or the music but the pubisher Gramschap surely rings a bell. It was a magazine, unregularly published as I recall it. A5R format, black and white and it looked much better than all these xeroxed (13 in a dozen)fanzines from these days. Gramschap was from Zeeuws Vlaanderen, indeed a VERY remote part of Holland and geographically speaking more like a part of Flemish Belgium. Very isolated and in those days very very poor. Good feeding grounds for anger and protest and disbelief in democratical politics.
I remember almost shocking articles on how they make your own homemade bombs for sabotage(at least it was shocking for me in those days as a pacifist).
I can see their obvious assocation (a bit too obvious for my taste !) with the Baader Meinhoff Gruppe that is long forgotten now because our nowadays "rulers" prefer to tell is that terrorism is an Islam thing only. I will not elaborate on that any further here and now.
I just remembered that another group of persons (collective ?)came from Zeeuws Vlaanderen in those days and first moved to Breda and later some of them moved to Eindhoven and started operating under the monniker 6e Kolonne and also had several solo projects and collaborations and also presented numerous exhibitions and concerts and so on in a no longer existing place in Eindhoven called 2B. One of them was called "Edwin" or "Etwin" too. His later project was called Zombies Under Stress".

Does this have anything to do with the music ? NOPE !

Am I just guessing or is anything about this true or based on facts ?
Let's call it hearsay .... or perhaps it is just gossip or I am creating another urban legend (broodje aap).

Anyhowt his is a great Blog, very enjoyable and digging up forgotten things that are worthwhile knowing about or reminded of.

this is very amusing indeed... if i may add a little info, members from Gramschap were partly from Zeeuws-Vlaanderen, partly from Amsterdam.
The original Baader Popgruppe consisted of Simon and Edwin, and on drums Paul Mahu, the first (and only?) punker from Zeeuws-Vlaanderen, who made quite original art pieces also at the time. Simon organized the gigs at the local cultural venue, collaborating with Carlos van Heijfte, another Zeeuw who was at that point programmer for the Effenaar in Eindhoven. So in this remote part of the Neverlands, we got gigs of Zev, 23Skidoo, and numorous other bands from the alternative electronic / experimental international music scene of those days.
Inspiration was not far away...
Baader Popgruppe fell apart when first Paul mahu got too crazy. For some time Anja from Breda took his place, but as i moved to Eindhoven, we were too shattered. Simon moved to Breda some time later.
Also at time time i was performing in Vovo Kai (guess you won't be able to pull that one out of oblivion, can you?), an electronic improvisation duo, and later started Zombies Under Stress as a solo project. With some friends we started Zesde Kolonne, first released cassettes under the name "Kaisettes", later also under the name Zesde Kolonne. We squatted the place next to the Effenaar and started an independent working place annex cultural venue. More info at Zesde Kolonne website
By now, i have released my whole repertoire to the public domain, and about nine hours of music can be downloaded from Pravdada, another offspring i started with Simon in 2002...

The synth-lines were provided by Das Ding, that chest on the cover is actually the infamous paul mahu, das ding shot the picture in the attic of their house in Terhole, of all places, projecting a slide of mahu's father's grave on him...
Well, it was his idea.

and oh edwin: vovokai will be pulled out of oblivion!