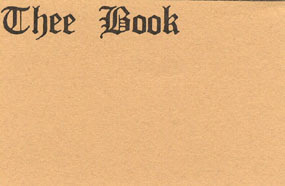 During the weekend you have some time to do some extensive downloads, so this weekend two 'big' compilation, starting with 'Thee Book', released by Graf Haufen Tapes. The guiding theme is books and each side of this double ninety minute tapes is a chapter, 'Movements', 'Crimes', 'Rituals' and 'Difficulties'. Its a who's who of the mid 80s cassette culture, with lots of known names (P16D4, New Blockaders, The Haters, Pacific 231, Kapotte Muziek, Smersh), but also many unknowns (AIZ, Bogart, Aesthetik Der Gewalt, Ritus). Lots of Dutch names too, De Fabriek, Disturbed Life, Arthur Berkhoff, MTVS, Unit 6, Friends In Low Places, Hessel & Nick Nicole & Alvin and Het Zweet).

WoW!
Just found this rarity here!
Many Thanks!