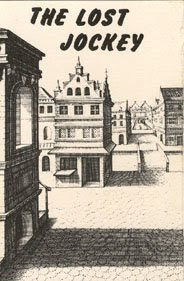 Perhaps the biggest surprise in the small box of EU Records that I'm uploading this and next week was this tape release by The Lost Jockey. I thought they just released those two records which I posted a year ago. Four long pieces of sheer minimal classical (think Steve Reich) music. Last year, John Wesley Barker, one of the founding fathers of The Lost Jockey, left a comment,in which he said about a CD re-issue: "The reason none of Lost Jockey has been released on CD is that it would have had to be re-released and the group split up with no legal constructions to enable such releases.", which is something I don't understand. Get them all to sign a piece of paper saying it's ok to release a CD - or since we know now:a double CD! No longer for sale at EU Records: I bought it.

Totally awesome! I really, really like this band. I hope I did the right thing and thanked you for the previous ones when I snagged them (reading one of those Alan Licht Minimalist Top-10 lists got me interested...), but in case I was remiss: thanks ever so much for all three of these. Your shares are so obscure I have no idea who anyone is. My Ohne, Henri Chopin, rare musique concrete tastes suddenly seem positively hype-driven. I have had my ears turned to more Completely Out Of The Blue names by this blog than any other which I can think of....many thanks!!

thanks a lot for this one - I didn't even know it existed! great (and a great blog in general)!

If you think there's an interest in having a CD I'll see what I can do. I do have the 1/4" Masters for this cassette.

Just e-mail me to take this further. Cheers.

This is really a great record. I would buy a reissue.

I have lovingly held on to a copy of this tape which I bought at it's performance at Dartington. Great to see other people discovering it and to have a digital version.

The origin of this tape has eluded me for over 2 decades (I picked up MY copy in a petrol station, just after it came out.)
For years I thought that the composer was Andrew Poppy (a ZTT artist) and lo and behold, I have just looked him up on Wikipedia...and he WAS!!
I knew nothing of the other artistes involved, so thank you for throwing some light on the subject.
And it is STILL a brilliant recording!

You may know all about this, but you can find a photo of The Lost Jockey in performance, at the link below:

I'm totally digging this - thanks!

Links to more recordings there.