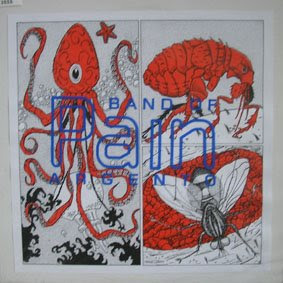 "Started in 1994 as a side project from Splintered, the band Steve Pittis was part of. After several vinyl and CD releases and two John Peel Sessions, Steve felt it was time to break away. Before long, Band Of Pain became the main concern, and Splintered split at the end of 1996. Since then Band Of Pain has released numerous records and CDs" it says on the website of the Band Of Pain.
This LP, which was recorded by Pittis and Dave Collins with assistence of Richard Johnson and James Machin, was the first release as Band Of Pain, and released on Pittis own Dirter Promotions label in an edition of 500 copies. Later a limited edition of 40 copies were released on CDR. Uk noise rock scene stuff.