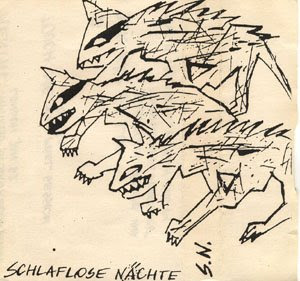 Among the lot of EU Records was also this tape by Schlaflose Nachte, which looks like a demo but perhaps it was officially released. There is on the b-side a longer piece which they recorded with Einsturzende Neubauten in 1981 in a concert in Berlin. As you no doubt remember from my previous postings about this band, they were before this called Suspect. I posted some weeks ago their 'Tanz Auf Dem Vulkan' tape and through EU I got a copy of my own, and it sounds a bit different and has more tracks. You'll find both versions in that post now.