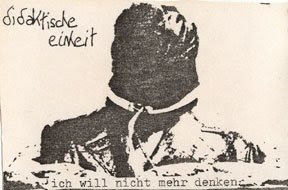 I used to have a great tape by this German band, but I forgot its title and I no longer have it. I kinda hoped it was this was from EU Records, but it isn't. Didaktische Einheit was, I believe, a kinda bigger group of musicians from Berlin and released various tapes in this time of true NDW. I see on Discogs that the tape I had was 'Dosis 6'. They also made a LP. This release is not mentioned.

This tape is AMAZING.

There actually are some different versions of this tape. The tape listed here has 13 tracks, but I also have a copy which has different artwork containing 11 tracks and 2 or 3 different track titles. That one is a live tape, it is also called dosis 7.