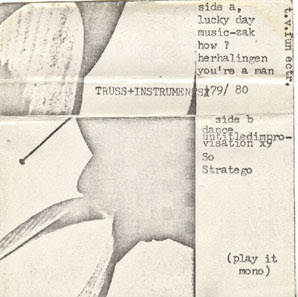 As promised here is that Truus de Groot tape that I promised last week. As lazy as I am, I copy a large chunck of info from http://www.tikibosko.com/truus_bio.htm:

Truus’ musical career spans over the last 3 decades. Born in Eindhoven , The Netherlands she debuted as a chanteuse just at the beginning of the Punk craze in 1976. Playing in a number of Dutch bands she released her first single in 1979 with a duet called “Plus Instruments”. Playing odd electronic instruments and vocals most of their performances were improvised. She teamed up Michel Waiszvich the inventor of the Crackle Synthesizer in numerous performances. At the same time she was also the lead singer in the popular Dutch New Wave Band “Nasmak”. Who released an album in 1980. But after hundreds of performances all through Europe Truus was looking for more challenges and in 1981 got on a plane to NYC never to call the Netherlands her home again.. Armed with background tapes of electronic percussion she reformed Plus Instruments with Lee Renaldo (now in Sonic Youth) on guitar and David Linton on Drums, while Truus played Bass and sang Lead Vocals. With this line-up they hit the New York club scene, released an Album and on to a European Tour. After returning to the US Truus again reformed the band with a number of musicians always very active on the club scene both in NY and Europe. At the same time she worked on her solo career performing at the famed “Kitchen” in Soho, and playing with Rhys Chatham. In 1983 she hooked up with James Sclavunos ( Lydia Lunch, Sonic Youth, the Cramps and now with Nick Cave and the Bad Seeds) to start a completely new chapter. She took a U-turn from the Electronic Euro-Beat and temporarily moved to Memphis to start Trigger & the Thrill Kings with Jim Duckworth (Gun Club) playing a very raunchy Blues, country rockabilly mix. Again they toured throughout Europe and the US and released various records. After so many years of touring, and numerous record releases, TV and Radio performances she decided to quit the music business in the late 80’s. Throughout the years she has been creating and recording her music. Some of the songs were recorded by The Vanity Set (James Scalvunos’ new band). In 1998 she married renowned artist Bosko and moved to Escondido, CA. Inspired by Bosko’s love for Polynesian Pop and encouraged by him to share her creations with the world, she finally decided to release a brand new CD entitled Muzotica in 2000. Her most recent follow-up is Rancho Exotica. Both feature a unique take on Exotica Music.

Ok, back to the tape. I acquired this only recently, but it's from 1980. Most of the recordings are from 1979. Truus plays the Steim crackle box, korg, putney and rhythmbox, guitar, plastic toy guitar, organ, flute, i.c. mic. television, echo system. Oddly enough the tape cover says 'play it mono'. Some pieces are indeed one channel affairs, with the other channel blank, which makes sense to play it mono. But not all tracks are like that, and those stereo pieces are super stereo. I left things entirely as they were, so one some pieces one channel might be louder than the other. This cassette is not mentioned on the website. It doesn't sound like anything like Nasmak, Plus Instruments ever did. Highly experimental electronic music of an improvised nature.

file is missing on massmirror ...

too bad the link is corrupted..

too bad the link is corrupted..

Hi ...massmiror is kaputt...so you cant do anything ..I saw only complaints and no stimulation
Thanks a lot for the beautiful pearls...
Sharing the rare with the world....
Keep on this super work
Cheers
Charlie

oh shitty massmirror. i will re-up this in a few hours OR tomorrow night.

This is amazing! I lost so much of my earlier work. Thanks!!! Truus de Groot (I am the artist)