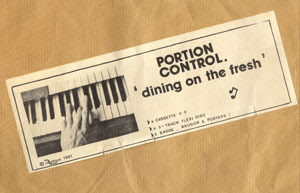 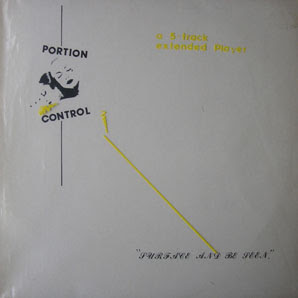 More early Portion Control! What a great synth pop and what a pity not more of it is officially re-released. 'Dining On The Fresh' is a really short cassette, only 10 minutes. It came with a flexi, but that one is bumped here, so I couldn't record it. I however scanned all the inserts, except the misplaced button, and the balloon which I never heard. 'Surface And Be Seen' was their first outing on vinyl and is still great too. Let me know if anyone has the flexi as a MP3, as I more than happy to replace this upload with a more complete version (433rpm@gmail.com).

Much obliged! Some of the old Portion Control releases are actually good enough to compel me to turn them off.

must be my english, but shouldn't that be: turn you on?

I have a perfect ripp of that flex but I guess you dont want my favours .

Many, many thanks for these excellent early Portion Control rarities, I only ever managed to find the vinyl at the time... x

Haha - I think I played on this record...