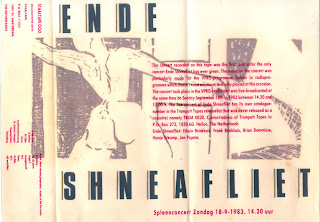 The second post for today is one of the more obscure Staaltape releases was given to me by one of the band members. It was the only concert ever by this band, which they played at the Dutch radioprogramm Spleen (presented by Ignit van Kasteren, of Ding Dong Records & Tapes) and contains some excellent music. In Spleen newsletter there was tape cover which you could cut out and so you had a releasen Trumpett release (trum 0020 actually). Staaltape later released it in their well-known packaging style, with extra material on the b-side 'demo-versions/preparatory studies of the live tracks). Great synth based music with vocals. A classic in my opinion, a pity they never played live again.

wow the treasures i'm finding here! i remember spleen very well, there was a time when every sunday afternoon you could find me in parkzicht, rotterdam, where they were recording the show for a while, incredible concerts like bain l. reiniger from tuxedo moon....

what was the name from that other show, every tuesday night, i thin it was bram van splunteren presenting it, a bit like a dutch version of the john peel show...

anyways, thank you so much for all of this!

I believe that was Moondogs?

yeaaaaaahhhh!!! moondogs!!! i wish i had the music collection i had in those years!!! i sold hundreds of albums when i got married and needed money bad, just kept some price possessions like this heat, chrome, metabolist, holger czukay hell i even still have the album from the rondo's!!!

I feel that in many ways music was so much better back then and i don't think it's nostalgia (well, maybe partly), just think about those pandora festivals, i don't think there has been anything like that since then! then again i left holland in '96 so i probably have missed loads of stuff....