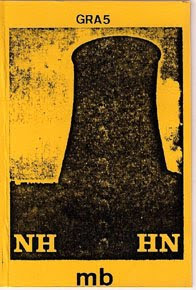 Grafika Airlines was the label by the same guy who was Mecanique Vegetale. I used to have a tape from that too, but alas no more. They also released postcards and photos, very fashionable (or should I say very Factory Records like?) in the early 80s. I'm sure this particular work by Maurizio Bianchi was also released by other labels, but this is an original from 1981.

Spectacular! Thank you for posting this.