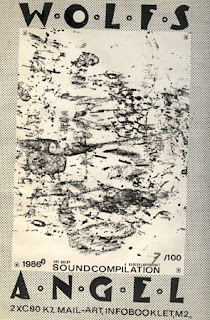 This is probably I think the very last compilation I have from Peter Zincken, and its also probably the first one released. 'Wolfsangel' was part of Material, a fanzine he used to make. Three or four issues were made, but only the second came with this double ninety minute tape with lots of industrial music makers, such as Clinique Lutetia, Hollow Sweet, Odal, Mensliches Alzu Mensliches, Le Syndicat, Nails Ov Christ, Crawling With Tarts, The Haters, Arvid Tuba, Torpsquartet, Narzisse, Dirt Myschkin, Louis Pasteur, De Fabriek, Factor 6, Ferial Confine, Giancarlo Toniutti, Mario Marzidovsek, Pax Romana, Crawling With Tarts, Bruno Cossanoo, Vital Parts, Commando Bruno, A Violated Body, Johna Koopman Ban, En Halv Kokt I Folio, Dan Froberg, Birdcagewalk, Kapotte Muziek, Ideas Beyond Filth, Ward Philips, Irritant and Zanstones. It comes in a large archive folder with the magazine and mail art by each of the contributors - a true visual paradise, but a nightmare to scan, which of course I didn't.

If you like to get the orginal mailart and magazine let me know I got still for at least
30 copies left lying here in an box waiting for you greetings Peter (Odal) :)
P.S.Sure I ask an little price for printing postage etc.