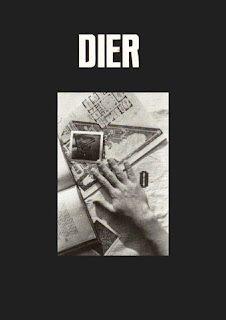 I posted some tapes by Dutch experimental rock band dier before, but Dr. Freakowitz tells me they also published an art magazine of the same name, and with one of those cam this cassette with music by Pim & The Potentional Prime Ministers (which seems to me a prophetic name if you know dutch politics of recent years), M. Hoogeboom, Dier and G. de Haar. A continuation of their free music which we already posted. This is released by Stichting Vrije Muziek, the organisation before they were called Stichting Update Material. The magazine is not scanned by Dr. Freakowitz, just some relevant pages with nice visual scores.