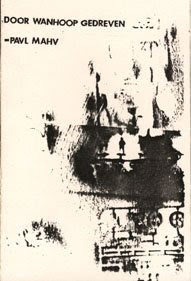 Pavl Mahv is one Paul Mahu, who was connected to the Baader Popgruppe, which we posted more than a year ago and Vovokai, also posted last year. Now that I have a new cassette player, I'd thought I better give this another spin, as my previous deck didn't like the tape, but this one sounds much better. Apparently Mahu spent some time in a youth prison where this tape was compiled and has music by himself and Danny Bosten (of Das Ding fame) as Auschwitch Im Sommer, The Dying Fascist Symphony, Guys From State Prison, Marlboro Index, Baader Pop Gruppe, Pavl Mahv/Vovokai, Iglo 5808 and Angry Young Men. Angry young man indeed, from the darker early 80s. Title means 'driven by despair'.