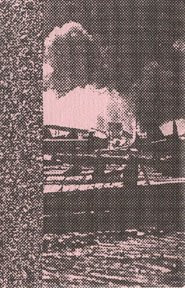 In a time when Merzbow was already heavily into releasing CDs he released this tape with him mixing raw materials by Matthew Bower, then known as Total. Before that Bower was in Skullflower and now as Sunroof best known. The cover lists two tracks, but no such point to separate was detected by me. Also the fifty minutes run one side of this tape, the other side has the same piece. So included only once.

great to see this tape up! would love to see some of the early ZSF obscurities here or why not Total "Sutra" tape....

don't have them, sorry!