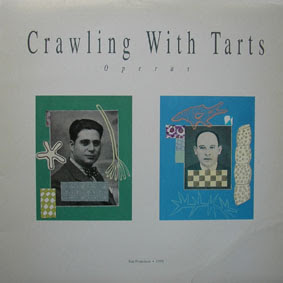 "Michael Gendreau and Suzanne Dycus-Gendreau have been working under the name Crawling With Tarts from 1983 to 1998. They have released musical work on cassette and vinyl and have appeared on several compilations. In 1991 they released a video collection which included their works made with video, 8mm film, and with the PXL2000 camera. Their musical work ranges from structured composition to free improvisation, and their output documents a varied approach to music as well as highlighting collaborative efforts which have spanned the years and the globe." (from Discogs)
"This record contains 4 operas that we composed for various live performances. On each of them 78 RPM record players were used, transducing singularities, especially one-of-a-kind amatuer-cut disks made during the 30s through the 50s. We also added various instruments along with the records. For these recordings, the records were often chosen for their signal and their noise information; it is our expectation that by releasing these operas on a similar species of media, the noise will increase with use as it has on the original recordings, enhancing the intended communication over time" (record liner notes)

They were always a very sweet and very talented couple. I hope they're still active... I truly haven't kept up and I have only myself to blame for that.

I believe Micheal is still active, under his own name. I believe he did a LP with Francisco Lopez

Thanks. I'm curious about CWT's music. Eager to listen to that one, then.

I used to have this. Then a "friend" took it with him, and I never saw him again. I lost so much music this way.
Thanks to you, I can at least listen to this again.
Many thanks