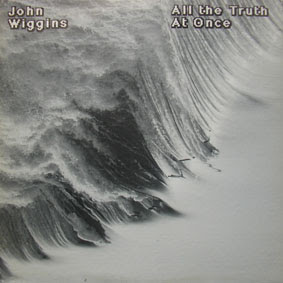 "Emmy-award winning sound supervisor, long time NYC resident and electronic musician. Part of the home-taping underground since the mid 1980s."is all that said on Discogs. Wiggins released two LPs on RRRecords, of which this one is the first. I don't have the other one. "The music was produced using 'coincidence' as a method of producing all forms. Sounds frome everywhere were recorded, sampled, synthesized and combined to see if a naturahttp://www.blogger.com/img/gl.link.gifl enviorment [sic] could be set up, inside of which I could find a 'music'." (liner notes). As much as I tried, I had to leave it unindexed. Nice mid eighties example of early computer music.

Not only is John Wiggins brilliant, but he's as sweet as all get out. I'm just sorry I haven't spoken to him in a few years.