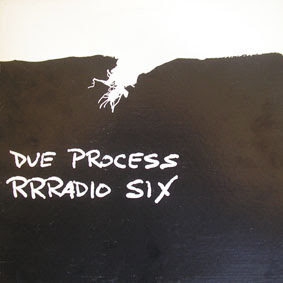 As I was posting Wiggins yesterday, I noticed he was mentioned as a member of Due Process: "Featuring Thomas Dimuzio, Ron Lessard (the man behind RRRecords) and John Wiggins, Due Process knows how to crank it out. While they can create a terrific din, the music actually leans a bit in the ambient direction, with lower dynamics and muffled timbres, albeit with a raucous pandemonium of noise just beneath the surface." The RRRadio series is where Due Process made 'spontaneous record/tape collages with improvised musical accompaniment'. On this record its Micheal Wayne (tapes), Ron Lessard (records, tapes), Dennis Reilly (reading Bukowski, Kipling + Reilly) and Andrew Herman (studio etc.). Furthermore tapes were used by tape contributions provided by Mark Murrell (Ann Arbor, MI), Martyr V2101 (Lowell, MA) & Barry Pilcher (Oyfed, Wales, Great Britain). Due Process still exists and made loads of other things, such some great 'anti records'.

wow...here is a piece of vinyl I have but never thought would show up anywhere...amazing...

Any chance that you could post any of the Due Process tapes? I would love to see RRRadio 1-6 that was classic. Thanks for posting this!!!