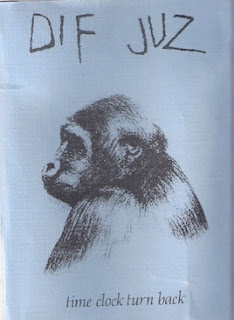 From Discogs: "A British instrumental quartet, Dif Juz (a play on "different jazz") consisted of brothers Dave & Alan Curtis (both guitarists), bassist Gary Bromley and drummer/occasional sax player Richard Thomas. They released two seminal EPs; Huremics and Vibrating Air in 1981 on the then fledgling 4AD label. The band then departed 4AD for the label Red Flame in 1983 where they released an experimental mini LP Who Says So?, following this they toured extensively through 1984 and 1985 supporting Cocteau Twins and Wolfgang Press, The before returning to 4AD to record their first full-length LP Extractions which featured contributions by Cocteau Twins Elizabeth Fraser (vocals) and Robin Guthrie (production). Shortly thereafter Dif Juz were introduced to Jamaican dub innovator Lee Perry and served as his backing band for a series of shows before eventually attempting to make a record together. The five tracks that were recorded - including a nine-minute version of "The Mighty Quinn" - never quite gelled, despite Robin Guthrie's attempts to mix them and the collaboration remains unreleased.  With the exception of a reissued and re-recorded Huremics and Vibrating Air (respectively) in the form of Out Of The Trees and a contribution to the 1986 4AD compilation Lonely Is An Eyesore the band effectively disappeared, though the members remained active separately; the Curtis brothers and Ritchie Thomas both recorded parts for This Mortal Coil's Filigree & Shadow album, whilst Thomas would also appear that year on the Cocteau Twins/Harold Budd collaboration The Moon And The Melodies playing drums and saxophone. He and Dave Curtis also contributed to The Wolfgang Press' albums Queer and Funky Little Demons, respectively.  It is rumoured that the band's 'final' dissolution came when Richard Thomas became a touring drummer for Jesus And Mary Chain, The, though the band never officially split up. After many years of silence, the posthumous release by 4AD of Huremics and Vibrating air appeared in the form of Soundpool in 1999. Coinciding with the album was the creation of a website which appeared to be created by the band. This page ran the banner "By us about us", as well as "More soon" though this never materialized."

A buddy of mine turned me on to "Soundpool" just recently and it's been getting played fairly regularly since. Thanks for sharing this one.

never knew this existed. thanks. first track ended up on 'Huremics' but retitled. would love to have heard their never-finished collab with Lee Perry.