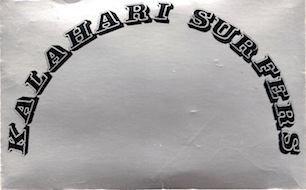 Perhaps the very first band from South Africa on this blog, although the tape was released by 235. From Discogs: "Formed in 1982, the Kalahari Surfers was essentially a string of studio projects realised by Warrick Sony at Shifty Studios during the 80's. These involved various personnel from that environment whose names were altered or simply reduced to first names to safegaurd against security dirty tricks persecution. The band itself was a fictional collective designed to dodge any flak that may have appeared from these forces.  The first release was inspired by the do-it-yourself punk ethic and was a cassette packaged in a silver spray painted box containing 60 minutes of music all recorded in a bedroom on a 4 track portastudio. It was titled 'Gross National Product'. "Being a white English South African means being schizophrenic. It means not having a firm foot in any culture, but also it means being priviledged to be exposed to many wildly diverse aspects of social life. A tapestry of influences." Warrick Sony is the only remaining member."

Actually... this node @ Deposit Files has been unavailable since last night (its now noonish Friday) - anyone else having a problem?

odd, so you first say thank you and then you download it? i don't see a problem and PLEASE PLEASE like it says on the side bar - but hey who reads these days? - report broken links through mail not comments, so why a comment? read that re-up policy carefully, if you will.