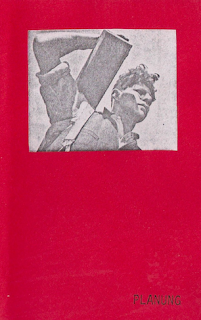 I borrowed a small box of tapes, all from The Netherlands, and it has some interesting things, which, obviously, I will post in the next few weeks. Best find, at least that's what I think, is this tape by Planung from Enschede. They had a flexidisc with Vinyl 6 and I posted a tape with two short pieces by two members of this band. But beyond the flexi I never heard any of their music, which was a pity, since I quite enjoyed their rock like improvised music with A Certain Ratio influences, especially in the way they treat their guitars. Perfect Ultra music!

Hi
Thanks for sharing this great tape !
Yyesod9

Hi,
Thank you. I'm Frank de Munnik, Planung-member, and I didn't have this tape anymore...

hi frank
do you have any other tapes then by Planung? send me otherwise an e-mail 433rpm@gmail.com