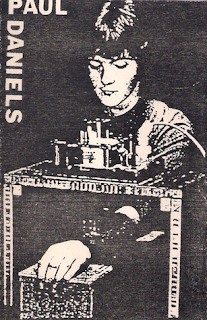 I have no idea who Paul Daniels is, nor does discogs by the look of it. Quite an interesting tape of industrial noise based music, but also with some quieter moments.

About Paul Daniels. He was a famous magician in the UK. TV personality. But this tape is recorded live in Durham by three hardcore industrial musicians from London. They set up a gig and announced it as Paul Daniels World Tour. So, many older sophisticated people came to the show. Confused and a legendary concert. Same thing happened like the Donna Summer breakcore guy (early millennium).

Paul Daniels tape is the same guys as Brobat Enema and Enema Digest (tapes). We also did a Dutch tour with Paul Daniels and Gorgonzola Legs in 1984/85.

Glad to see tis blog is back! Thanks again for these lost treasures. This this bizarre, fantastic tape. The utter mystery of it makes it all the more entrancing.