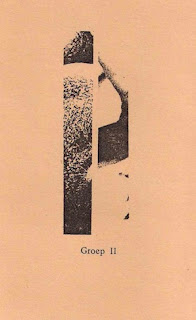 A new wave of Ultra, The Netherlands own no wave/post punk flashes through the Netherlands, so whatever we started in 2007 finally has paid off in some events next week (Nijmegen, Eindhoven, Rotterdam, Amsterdam, info here), a book on Ultra by former young lion Harold Schellinx and even an one-off 2012 issue of Vinyl magazine. I re-upped all of those old magazines here again, after the recent megaclashunload. Now, I paid my duties by posting many of the early 80s tapes I had in recent years, but through sheer coincidence I got some more and I will post them in the next days. Not necessarily very Ultra, but very Dutch. The first one is this tape which I even never heard of, one recorded at the various workshops Kubus did on modern, electronic music. Hayo den Boeft later started The Love Choir and his own label Decay Int. Martijn Sandberg released a tape on his label. All posted of course.