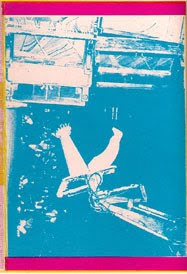 From discogs: Survival Research Laboratories was conceived of and founded by Mark Pauline in November 1978. Since its inception SRL has operated as an organization of creative technicians dedicated to re-directing the techniques, tools, and tenets of industry, science, and the military away from their typical manifestations in practicality, product or warfare. Since 1979, SRL has staged over 45 mechanized presentations in the United States and Europe. Each performance consists of a unique set of ritualized interactions between machines, robots, and special effects devices, employed in developing themes of socio-political satire. Humans are present only as audience or operators.

Cool! Saw these guys a few times and nearly got hit by a flying chunk of 2x4 shrapnel from the 2x4 gun.

thank you so much for this !

Nice to see this up here. Just for information's sake, in case anyone cares... This was recorded at the show of the same title in 1989 in San Francisco. The show was underneath the freeway, at Perry & Stillman streets. We prepared the soundtrack by recording all of the machines at the SRL compound, and then I made tape loops (yes, old-fashioned cassette tape loops!) of the best of the recordings. We had 4 cassette decks at the show running through a mixer, and I swapped the tapes in and out during the performance. We also had several friends running around with shotgun microphones, pointing them here and there. I did the live mix during the performance, and we recorded it all. I don't remember if we recorded it to another cassette, or to a DAT, though I have the master tape around somewhere still!

As an amusing aside, during the performance we were set up about 30 feet or so from one of the freeway pillars, around which were stacked pianos. The pianos were set on fire during the show, and got so hot that one of the cassette decks melted slightly and stopped working. We didn't realize what the problem was until afterwards, when we realized what had happened. Fun stuff.

I also did the soundtrack for the 1990 show up in Seattle, though that one was never released.