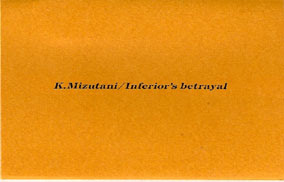 Mizutani was a member of Merzbow in the 80’s and has done solo work since 1989. He has recordings on Ulcer House, ZSF Produkt, Shirocoal Recordings, NEdS, Sounds For Consciousness Rape, Pure, Artware, Kaon, e(r)ostrate, Povertech Industries and Flenix Records. This release was packaged in side-open cassette shell which has been spray painted white, except one strip which shows the artist and title on the j-card below. The cassette itself is also painted white. Limited to 100 numbered copies.

Thank you very much