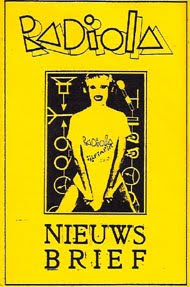 I wasn't around to post anything yesterday, so two today. The first is the Radiola Nieuwsbreif, which was the audio newsletter released by Willem de Ridder. His radioprogramm (1980 era) was to play music people would send him on cassette, with no advance listening, just open the enveloppe on the air, play the tape. His dream was to have a magazine on tape (or earlier on vinyl and later on CD), and although there was a newsletter on paper, this is the only time he released one on cassette. With Andrew McKenzie he later released about 10 cassetts which acted as a sort of magazine under the name of Spiral. There is spoken word on this tape, in Dutch, in De Ridder's characteristic voice and of course music by various people. Cut as one track here, to make it like a radio programm.