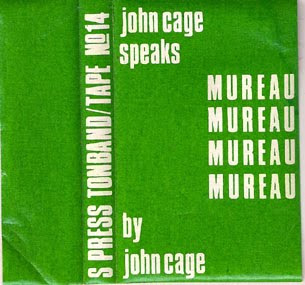 Of course John Cage needs no introduction (well, I hope). 'Mureau': the texts are letter-syllable-word-phrase-sentence mixes obtained by subjecting all remarks by Henry David Thoreau about music, silence and the sounds he heard that are indexed in the Dover Publication of The Journal, edited by Bradford Torrey and Frances H. Allen (New York, 1962) to a series of I Ching chance operations. Personal pronouns were varied according to such operations. The title is the first syllable of the word music together with the second syllable of the name Thoreau" - that's what Cage said in 1970 about this work. This is probably on of the oldest tape releases on this blog! Released in 1972.

one of my favorite recordings of all time!
thanks....

thank you much for this. Your blog is incredible. Profound in its scope and your obvious dedication. Thank you again.

Wow, thanks for this! I wish I'd known about your site last year, when I was writing an essay on Cage Discography.