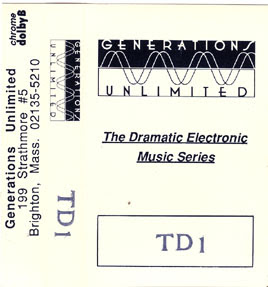 From discogs: "Thomas Dimuzio is one of unsung artistic figures whose influence and abilities have substantially outstripped his visibility. Composer, multi-instrumentalist, sound designer, experimental electronic musician and recording studio owner, Dimuzio has been busy doing his thing(s) since the late 1980s with critically acclaimed releases issued by the legendary house of audio misanthropy, RRRecords and former Henry Cow drummer (and current Dimuzio collaborator) Chris Cutler’s well-regarded ReR Megacorp label. Equally fluent in a nearly every contemporary post-techno style, Dimuzio’s work clearly demonstrates an insider’s knowledge of older experimental musical forms such as musique concréte and electroacoustic, as well as contemporary ambient-industrial and noise. Thomas Dimuzio has performed and recorded as a solo artist and collaboratively with Fred Frith, David Lee Myers, Dan Burke, Due Process, 5uu's, Matmos, Wobbly, and many others." This is ripped from the cassette version. I see here that there is also a remastered CDR version available, so if you like this, get it properly.