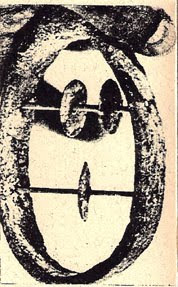 Compilations play an important in this blog, but the were also the oil in the machine of cassette labels. This particular one was originally released by Big Body Parts and then later re-issued by Apraxia, which is this version. It has mainly US artists as Bunker Club, Illusion Of Safety, The Haters, John Hudak, Then Behavior, Allegory Chapel Ltd., Eric Lunde, City Of Worms, blackhumour, S.B.O.T.H.I., Hands To, Odal, Backwash and Jef Sampson. Thrown in are excepts from Costes, Suckdog, Marty, Man, Monkey, Christina, Officer Cop, Tom Viele, and Captain Clark between tracks.