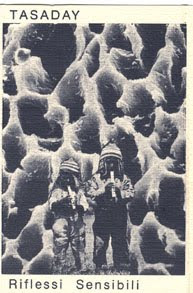 From discogs: "The experimental/noise/tribal/postrock/industrial music band, located in Brianza, Italy. Active since 1982 and formed from two bands named Die Form & Orgasmo Negato, (changed in Die Form & Nulla Iperreale in 1983) the band chose the definitive name Tasaday in 1984. In the 80s they had many live performances, published fanzines, 3 LP, a unknown number of cassettes and many radio transmissions. In the 90s they had some peformances, one CD and other stuff."

do you have the Die Form/Nulla tape "La Condizione Umana"?

You can hear a clip of it here:
http://www.youtube.com/watch?v=V-8g2oLLoC4