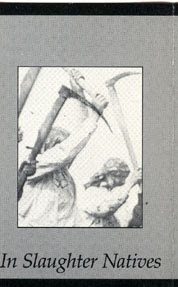 Dr. Freakowitz gave me this, and its not the sort of thing I like, but then this blog is not what I like. Also I think this is not really forgotten, as this tape was, perhaps in a somewhat different form re-issued on CD by Staalplaat and later on Cold Meat Industry. Its one guy who created this bombast, Jouni Havukainen, and discogs says: "In Slaughter Natives is the piooner band in the symphonic industrial field. Their music is a mix of heavy electronics, martial percussions, religious chants, orchestral samples and gruesome demonic vocals. After releasing some great albums on Cold Meat Industry and Staalplaat, the project remains dormant since many years but keeps getting on stage from time to time."