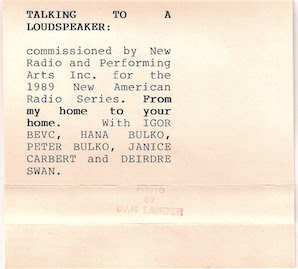 A piece of sound poetry and electronics. Dan Lander studied art at the Nova Scotia College of Art and Design in Halifax (Nova Scotia) with a focus on performance, video and sound. After leaving school he set up a modest recording studio in his apartment and developed a method of composition which sprang from his interest in phonography and the referential in recorded sound. This interest also led to his involvement as an editor of two anthologies: Sound by Artists (1990) and Radio Rethink: Art, Sound and Transmission (194). He was the producer of the radio art program The Problem with Language (CKLN, Toronto) from 1987 to 1991. His works for radio and loudspeaker are dependent on sound recordings gathered from real life situations, organized with an ear to the ways in which meaning circulates through the invisible conduit of sounding and hearing. His works have been widely aired in North America and Europe.

Dan was a great guy when I happened to cross paths with him back at the turn of the nineties. I've heard a couple of amazing pieces of his phonography.

Dan Lander has just participated in a new book called Music IS Rapid Transportation ...from the Beatles to Xenakis. Included in the book is a "listening autobiography" and several short essays by Dan on music as well as a list. Check it out at: www.charivaripress.com