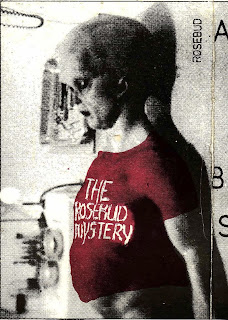 This was not so much a side-project of Dull Schicksal as a precursor of AA Kismet, the band that tried to make' accesible' rock music, something that Dull Schicksal always loathed. (allthough it was not sure if they were aware of that). So some songs here were played at DS live-sets, and some ended up on the first AA Kismet album. This band -the name Rosebuds slightly reflected the urge to please- never pleased i mean played live officially but they were part of a theatre piece in the Rotterdam theatre Lantaren/Venster that played a week or so, made by Eveline Ketterings (she sings a few songs on the tape under the name of 'Rosy Rosebud') (forgot the title of that play, sorry). People that play on the tape except Eveline are; Frank van Berkel, Clemens Cillekens, Ronnie Krepel and Lukas Simonis. It was chosen 'tape of the week' (or month, forgot that too) at some incredible influential dutch magazine( forgot which one, sorry for the last time). The last song is missing! (i'm not apologizing for that) The tape broke.
donated titi tabarnac