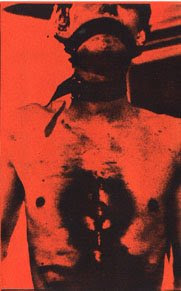 It is been quite a while that I posted stuff released by Eindhoven's Kaisettes label, also known as Zesde Kolonne. Here's one which I borrowed of yet another friend, who gave me some more nice stuff which I'll post soon. I have no idea who was behind Unit6 but it seems to me that SMtv is anagram of MTVS, who were in the previous post and of whom I'll post more stuff soon too. Quite noisy and industrial.

Hi 433
there is a free download from the Zombies Under Stress website of a c20 tape called "Unit 6"...
It's the same material..
http://www.pravdada.org/zus/download.html