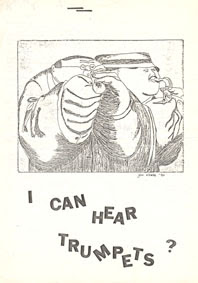 The most important Radioshow when I was young was not John Peel, nor Radionome but Willem de Ridder's Radiola Improvisatie Salon. He would play any tape with music sent to him. During the show he would rip open the enveloppe, read whatever note, and then, without any prelistening, play the tape for five minutes. If you sent in a tape, you'd got the newsletter and could take part in action's, which I never did. The radio station, VPRO, also released one tape, which at 20 guilders, was quite expensive I thought. No real cover and two sheets of info which didn't fit in the box. A louzy job. Veldman later on worked on musical projects with Willem de Ridder as FNTC.

i think you forgot to add .zip to this file! shame, i always download whatever you put out but not this one. something seems strange with it.

just put .zip behind it and it should i should imagine.

Thanks for this. I can't wait the moment you'll post your All Chemix Radio stuff!

might be a long wait: i don't have any of those all chemix tapes.

still not a zip