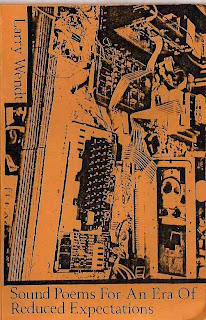 From discogs: Larry Wendt (1946, Napa, CA, USA) started his creative artistic activities in the mid 70s focusing on creating text-sound compositions. His works are widely represented in various radio programs and performances in different countries. He is the author of numerous publications under anthologies in MC, LP and CD-formats. Since the 1970s Wendt’s audio productions were widely represented at various international colloquia and festivals of experimental poetry and music, including such as: Small Press Festival (Antwerp, 1976), Parola & Suono (Florence, 1978), un espace parle / A spoken space (Geneva, 1979), figura-partitura (Novoli, 1982), Nattoving (Stockholm, 1983), several times – in 1979, 1983 and 1987 – at the Festival International des Musiques Experimentales (Bourges). In 1980 he recorded the series of audio productions “The Yat System” (jointly with D. Alleluia), on the basis of which the choreographic productions for the Public Education affiliate television station (San Francisco) were implemented and recorded. Wendt has participated in a large number of international festivals, including International Festival of Sound Poetry (Toronto, 1978, New York, 1980), Phone 2. Poesie en action: Materialite de Voix (Georges Pompidou Center, Paris, 1984), Three American Electronic Artists (Oakland, California, 1985), Sound Works (within the Biennial, Sydney, 1986), Festival de Poésie sonore (Geneva, 1989), Polyphonix (San Francisco, 1984, Quebec, 1991), bobeobi, Internationales Festival der Lautpoesie (Berlin, 1994) and many others. He is the initiator and organiser of various sound-poetic events, including First West Coast International Sound Poetry Festival (San Francisco, 1977). Productions from his extensive audio-archives have been repeatedly used for creating retrospective reviews, including: Lettrism and Hypergraphics: The Unknown Avant-Garde 1945-1985 (curator J.-P. Curtay, Franklin Furnace, New York). Wendt is the author of a great number of articles, dedicated to the history and present state of the international sound poetry, including such as: Vocable Gestures: A Historical Survey of Sound Poetry (in collaboration with S. Ruppenthal, Art Contemporary #9, San Francisco, 1977), History of Sound Poetry (in collaboration with S. Ruppenthal, Text-Sound Texts, New York, 1981), Sound Poetry: I. History of Electro-Acoustic Approaches. II. Connection to Advanced Electronic Technologies (Leonardo #18.1, London, 1985), Narrative and the World Wide Web (Art & Design #45, London, 1995), etc. He is the curator and publisher of the anthology of the international sound poetry Vocal Neighborhoods: A Walk through the Post-Sound Poetry Landscape (Leonardo Music Journal, Cambridge, MA: MIT Press, 1993). Larry Wendt lives and works in San Jose (California, USA).