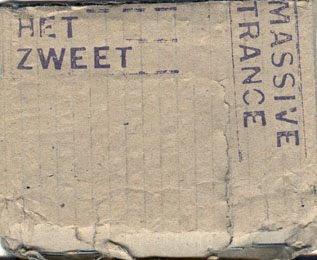 As promised earlier, here is the only other tape I have by Het Zweet, 'Massive Trance'. Again a bit presented like a demo, but with the music by Het Zweet that we know from his album for Recloose Organisation. Lengthy tribal percussion music. In the 'Nederlandse Cassette Catalogus', this is said be released a label called Zweepslag, and thirty minutes, but nothing about Zweepslag here and its a sixty minute tape.

Thanks for this, I never knew it existed.

Put me in a massive trance. Many thanks for sharing.