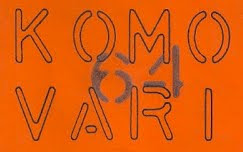 Recently I was handed a box of cassette releases from someone who thought it was time to pass it on, and before it arrived at someone who may or may not sell it (which is not me), I got to pick a few tapes which I transferred, as it had some interesting items. So while reluctant to re-open this blog, I will do so for the time being. I am not looking for trades, demos, reviews, spam, or anything. Just to post these few tapes for the time being and then go dark again. All of them are in the realm of cosmic, synth based ambient music. If that is not of your interest, then you have bad luck. There is nothing else to be posted. Except for the one thing I am posting today.
In the middle of 2016 I got an e-mail from one Paul Werkman saying he did the Komovari64 7" that I posted 9 or so years ago. We were in some contact, I transferred his 2 cassettes and some other unreleased pieces, spend an evening together. I gave him some pointers for blogs to give his music to and it ended up on dieordiy2.blogspot.com who posted this some time ago, along with the story I helped writing of Werkman. I haven't been in contact with him since, but as I do like his stuff a lot, I'd start with posting his two cassettes and 7" as a single post today. Find it here
None of this is for sale with me.

The life story of Komovari64:

"When I was 19 I was very much inspired by electronic music, which I read about in music papers, such as Muziekkrant Oor, things like Orchestral Manoeuvres In The Dark and Human League. I wasn't a very social person, so I never knew many people who are also interested in doing that kind of music, and I didn't like punk music very much. It seemed to me that this electronic music was something one could do on it's own. I got a pretty large inheritance from my grandfather who died, and it seemed to me great if I could have some equipment and see how it would be like an electronic musician. So I bought all of this stuff new, the Moog, Korg, a microphone, a small mixer, some sort of echo device and a reel-to-reel machine. The vari64 rhythm machine was second hand I think. I no longer know why I didn't buy something new for rhythm machine. I also had a guitar and a crackle box. I even paid something extra to have it all delivered by car to my home. I was living with my parents still, as I was at the university (studying political sciences) and that was close by. I remember unpacking all this stuff and putting it on a table, thinking it looked like a proper studio. I wish I had a picture of it, but sadly I don't. The first time I switched it all on, I was thrilled, but it was very hard to get a sound out of it. Maybe naively I thought machines like this would play by themselves? I think I listened to the rhythm machine for a long time, just by itself, going through the echo, which I thought sounded great. After a while I started to get sounds out of the other machines, but I soon realized I had no idea about making songs, or melodies, so mainly my 'songs' were rhythm and sounds, also because I played everything live, using 2 hands, which I though this was supposed to be. They did it like that on TV.
Of course I knew about the whole world of independent record labels, and even cassette labels, so I thought it would be good to do a 'label' myself. I ordered from Plurex the manual for independent labels, but the release of vinyl was a bit scary when I read all of this, so I took the two best songs I had, 'Pana Pagan' and 'Stop' and released a very short cassette, which was copied on sixty minute tapes, but cut them by hand. I did a really bad cover, not by accident, but I had no idea. I called the project Komovari64, after the three instruments I liked best; it sounds a bit like Minny Pops of course (also named after a drum machine), which I quite liked. I copied some, some of which I gave away to some fellow students. Some liked it, but most didn't understand this at all. I also put some in the local record store, 'Melody'. The cover is orange, as is the colour of the Dutch royal family, and I hoped that everyone thought that was really shocking, but nobody ever said something about it. I wrote them all by hand, since this seemed very arty at the time to do.
I struggled on and everytime I looked at that Plurex booklet, the whole idea of a real record seemed appealling and I did the 7". I recorded 5 songs, which were very smooth and I mailed my tape to a pressing plant. It was the wrong (slow) speed, but they made a test pressing anyway, correcting the speed for free, which I thought was very nice. I got about 10 copies of the testpressing or so, but then I got scared of actually a lot of people hearing this music, so I made this orange cover on xerox machine and put these 10 in the same record store for sale. I went in every week to see if they were sold, and after six months 4 were, and I found it embarrasing to ask all the time, so I didn't anymore. When the store disappeared I didn't go back to ask for the unsold copies.
By then I no longer lived at home, but in a squat, but also was diagnozed with schizoprenia. I heard voices and therefore I couldn't listen to my voice on tape. Slowly I had to sell the equipment, as I was not working and due to my state I also forgot to collect welfare money. First I sold the guitar as I had used this on only one song. I had a bunch of songs, no vocals, but in the same style, which all seemed to me the same at one point. I made a second cassette, but beyond making the master and the cover nothing happened; I think I made some copies (10 I think, mostly for friends), but not a lot, maybe with different covers, I am not sure now. This cassette is called 'Komonovari', since much of the music was in mono. I found too late to change the music, since I recorded only live and couldn't re-do the music.
In the end I even had to sell the rhythm machine, so I taped 5 minutes of different rhythms on a cassette with the microphone and did 3 small, 1 minute pieces, with a cut up of that 5 minute rhythm tape, and a manic 'text piece'. I remember I threw the microphone out of the window. I believe I sent these three pieces to a compilation label project in France, but I don't know if it was ever released. It is very likely but I didn't put a return address on it.


After that I lived on the streets for a while, dabbled in drugs, which wasn't a very good combination, but someone 'found' me, and helped me to work on all of this. I never told him I did music, as it was all behind me. A few years ago my mother died and I must have given her a box of cassettes and tapes with all that music on it, but I haven't heard any of it as i no longer have anything to play it with. It's not a lot of stuff in terms of 'finished' compositions (I always called them 'little pieces') or even 'unfinished' ones. These days I work for the city government (department of parking meters!), play tennis and sometimes listen to Coldplay and Muse."
Posted by 433 RPM at 2/16/2017

Enjoyed you sharing your story and its always very personal when an artist shares their struggles to be creative. Sometime the music takes off and the artists receives some fame other times their music fades away which does not meant it deserves that fate it just happens.

I would love to hear the music BUT the link is dead! Can you re-up the music to a new link?