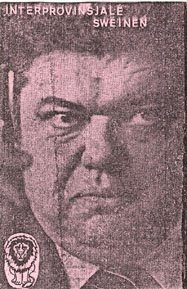 This is the weirdo department. For a start there isn't a proper band name mentioned, unless Interprovinsjale Sweinen is the artist and the title. However, I think this is by The Lost Attic, since it's released by their own Wegwerp Tapes. I might be wrong but I await comments then. Two tracks were recorded with soundmaterial by Kapotte Muziek, on which Frans de Waard says here:
"We send this label a c15 with material for them to release completly, but they made two new tracks out of our material and credited it to us" The original c15 is apparently lost. Nice electronic 'disco' music with weird sounds.
Recently I got an e-mail saying that Barry Rikkerink, the guy behind The Lost Attic died earlier this year, but my source didn't know more. Anyone who does?

Nice find and a good listen, thanks.

Could be the lost attic, the guy on the photo seems to be Henk Vonhoff, a Dutch local politician and at the time a true opponent to the squatting group to which 'the lost attic' belonged. To call him a 'provincial swine' seems in tune with the sentiment back then.

BTW, this is the first time I hear about this tape.

of course the guy on the cover is vonhoff, i never suggested that it was the lost attic. this might be also be recorded by a guy called 'loepie' - i may put up a tape by him also - one day