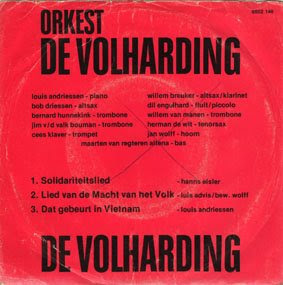 A short post today, but one that fits the May 1st celebration well, I think. Louis Andriessen's small orchestra De Volharding play working class inspired tunes, such as Hanns Eisler's 'solidarity piece', 'song from the power of the people' (by one Luis Advis) and Louis Andriessen's 'Dat Gebeurt In Vietnam' (that happens in Vietman). The proceedings of this record went to the medical comittee Netherlands-Vietnam. All around fine left wing music. Louis Andriessen is still active as a composer and sold his archive for some big bucks. Willem Breuker is also part here, as well as Jan Wolff, the director of 'De IJsbreker' and pulling strings in the world of Dutch music. Elitist these days perhaps, but that's the way ideals goes, says the cynic in me. Xirror doesn't work, hopefully for a short time, so this is on rapidshare only.

regarding the Xirror/Massmirror issues, I've noticed a lot of bloggers complain about this recently... it seems like not too many are aware of www.shareonall.com. it's another "spreading" service like the above two. it lets you choose up to 5 other hosting sites (from a total selection of around 10 or 12), plus you can set up a login ID and there's a file-management system for the links (something MM and Xirror lack, in my experience). like I said not too many seem to be aware of it yet but I've been using it with great success so far and wanted to "spread the word"... hope it helps. cheers.

thanks for this. will check it out, and perhaps re-do the two xirror posts

Greetings 433. I wanted to let you know that I've added you to my music blogroll/directory @ http://music-bloggers.blogspot.com

If you would like to help me out, you can do so by linking back to my blog. It isn't required in order to make the list, but of course I always greatly appreciate it.

Thanks for making so much formerly forgotten music available. Take care.